Nyrender 3d Architectural Visualization Company offers a comprehensive range of design solutions in the niche design vertical of 3D interior rendering services. The agency acquires a thorough understanding of the client’s requirements and has at its disposal the technical resources to accomplish it. We deliver tailor made solutions to our patrons that completely satisfy their rendering requirements.

When a prospective homebuilder or homebuyer approaches us with their rendering requirements, we take into account each and every minute requirement and offer the following list of 3D interior rendering services:

At the agency, our team of engineers, designers and illustrators work with the belief that design solutions need to work in real time environments and situations. The team focuses their effort while working on the client projects and apply innovative methods to achieve detailed visuals.
Cutting edge software resources employed by us include:

In a highly competitive business environment, we deliver the following advantages to our patrons:

• A creative rendering of product designs that portray them in the best light
• We create visual ideas with the help of 3D view which produces high end, detailed renderings of interiors for our clients
• Photo realistic renderings and animations are incorporated to highlight design ideas

Nyrender Company is committed to delivering a client centric approach. We constantly keep open channels of communication with our clients. Our 3D interior rendering services are delivered within quick timelines and in an affordable manner.

Our approach to implementing your dream design through 3d Interior Visualization includes the resolution of the spacing and lightning.

It could be presented as a virtual tour around your room. This option will allow you to closely examine every detail from different angles with different lightning to provide a complete vision of future design. Revision along with changes does not require much time while helping to optimize the total cost of the project.3d Interior Design is such a process when the modern interior designer practically impossible does without. 3d imagining is created in order to demonstrate the whole designer’s project to a customer.

Certainly, architectures dispense with computer programs before and they had to do the project manually. However the process forges ahead and so as all piles of maculated drafts documents and the whole interior design, and other work is creating in 3D computer program today.

The interior created in 3D is an extensional and realistic image, which is produced according to special computer technologies.

On account of that the project is implemented in the same program so we can modify interior design during the process of modeling, change colours, bills of qualities and materials for future interior in real time.

3d interior design lets us to use the special set of universal light projection technologies. Natural and attractive illumination in final images of visualization is created by virtue of such technologies. 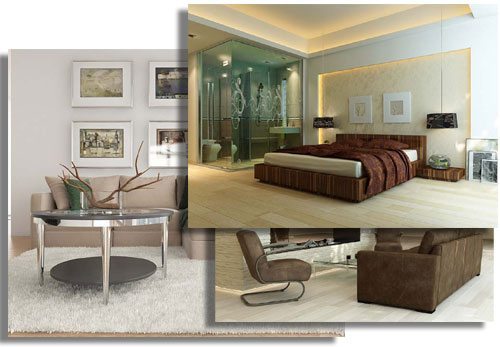 As a result of interior design’s forming and rendering and using 3d program we can get realistic perfect quality and high resolution pictures, so it is possible to print and show them to a customer not only as a part of a project’s program.

As a rule such important details as sizes, proportions, demonstration’s forms and others are formed at the first stage of the work with a client and can be shown in the project’s technical enquiry. So far as concerns sources because without them we can’t be realized in reality, so and 3d interior design imagined by a client, when here all drafts, plans of the premises, it’s photos, sectional elevations, and ordinary sketches, drawings or magazine’s examples from the internet are stand us in good stead.

3d modeling comes with creating objects’ geometry of designing visualization. This stage in producing 3D design is the first. During the modeling every element of a developing project is being worked out very carefully and minutely. Such a process is considered the most labor-extensive and lasting. The natural creation is occurred in here when a designer using only virtual instruments as an artist brings into being the real space in three-dimensional program. At the moment when the whole modeling is completed it is possible to envisage both shape and proportions or details of a future project.

The next stage in 3D rendering is appliance of materials. Here the object begins to take the following characteristics as colour, pattern. At this stage it gets both lucidity, and roughness, refraction index and even reflective feature. It stands to mention that for every 3d object’s model its own material is produced, because each project which is created by means of a program is unique and individual. There are no any materials for a new visualization in three-dimensional program. This stage of interior’s projecting like modeling is continuous timing-wise because of definite complexity and peculiar nuances.

The final stage of architectural visualization’s forming is rendering. Realistic specifications of space illumination are started creating on this particular stage in order to watch the way of modeling objects are blend into the big picture.

True creation is beginning at this moment. Here both design and interior aren’t go into hiding from a trained project’s creator eye, when the author has a designed taste and qualification. 3d transformation into the image also supposes a long-term work and the range of computation capacity. And here the error of only one static picture can endure from fifteen minutes till several hours.

Contact us for 3D Interior Rendering Services and our client engagement will get in touch with you within 24 hours.